Muscovy ducks are a unique duck you should definitely consider adding to your homestead. They are entirely different from other domestic duck breeds, since Muscovies did not originate from Mallard ducks. Muscovies are also quite distinctive with their long claws, very wide and flat tails, and red face growths called caruncles. 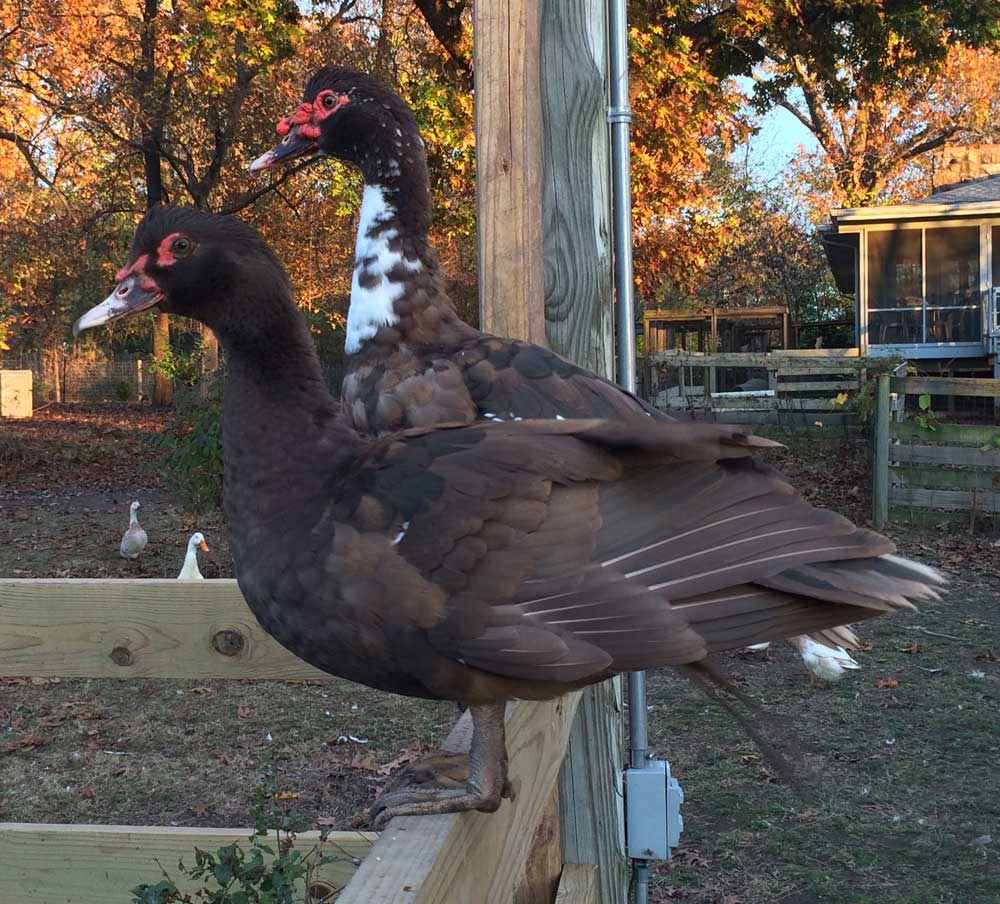 In comparison to other breeds, Muscovy ducks are also virtually silent – the boys hiss softly and the girls make a sweet trilling sound that is also quite soft. You can’t hear a flock of Muscovies from across the yard the way you can with “normal” ducks. This is a great benefit to people who have close neighbors that would be bothered by a group of noisy, quacking ducks.

A female Muscovy can lay about 200 eggs per year, and – if allowed – can also hatch babies three (or maybe even four) times a year, with as many as 20 ducklings each time. Eggs will hatch in about 35 days. Muscovies are also known as one of the best “broodies” out there–they can hatch virtually any species of egg better than the best broody chickens! 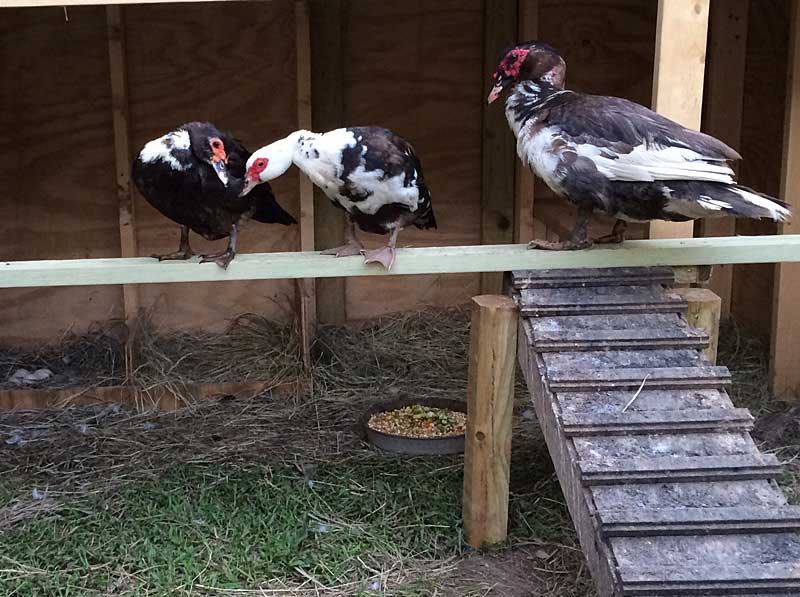 Muscovy males are quite large, weighing as much as 15 pounds, in comparison to females, who average in the neighborhood of 8 pounds. Males can be aggressive during mating season, so it is best to very much limit the total number of males.

There is great variety in coloring including black, blue, chocolate, white, and lavender, with pied colors, of white mixed with any other color, also being common. 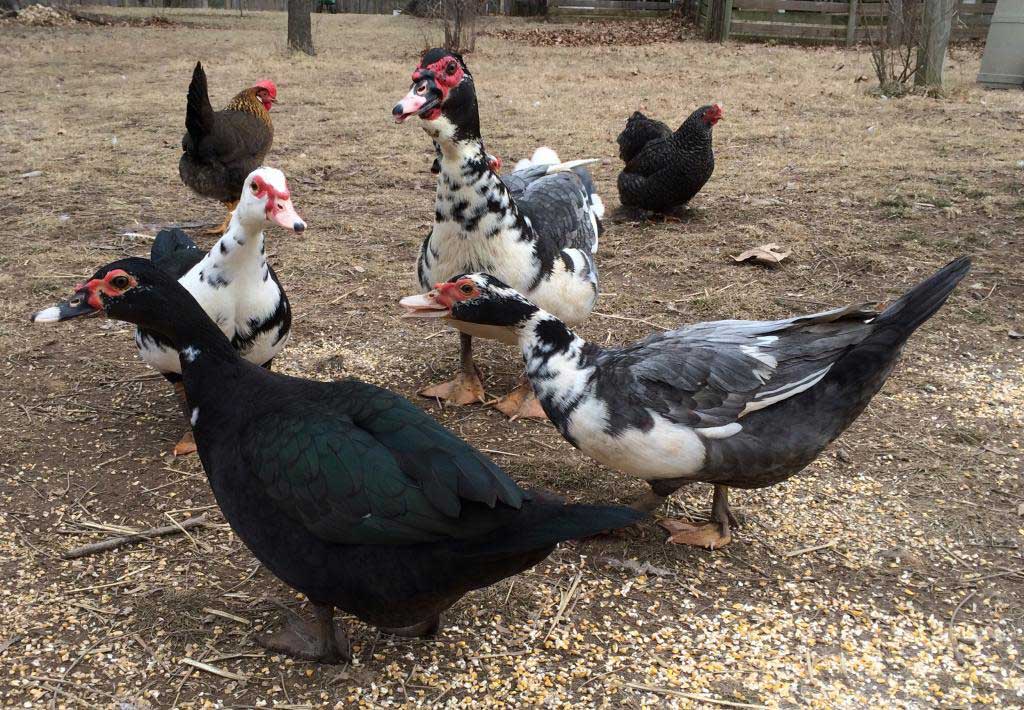 Muscovies love bugs with all their hearts. Even baby Muscovy ducks actively eat flies and mosquitoes very soon after birth. This is one of the many desirable traits of Muscovy ducks.

Muscovies are considered perching ducks unlike the other domestic breeds which are derived from Mallards. If Muscovy wings are unclipped, it is not uncommon for them to roost in trees or on fences. Even when clipped, your Muscovies will greatly appreciate having a ramp leading to a perch to roost on.

Our other breeds of ducks are easy to herd into a barn at night, for their safety. However, Muscovies are great flyers and like to fly to the top of the barn roof, instead of walking obediently into the inside of the barn. In this way and others, Muscovy ducks are more independent-minded than other duck breeds.

All in all, the Muscovy is a truly intelligent, beneficial, and friendly breed of duck. 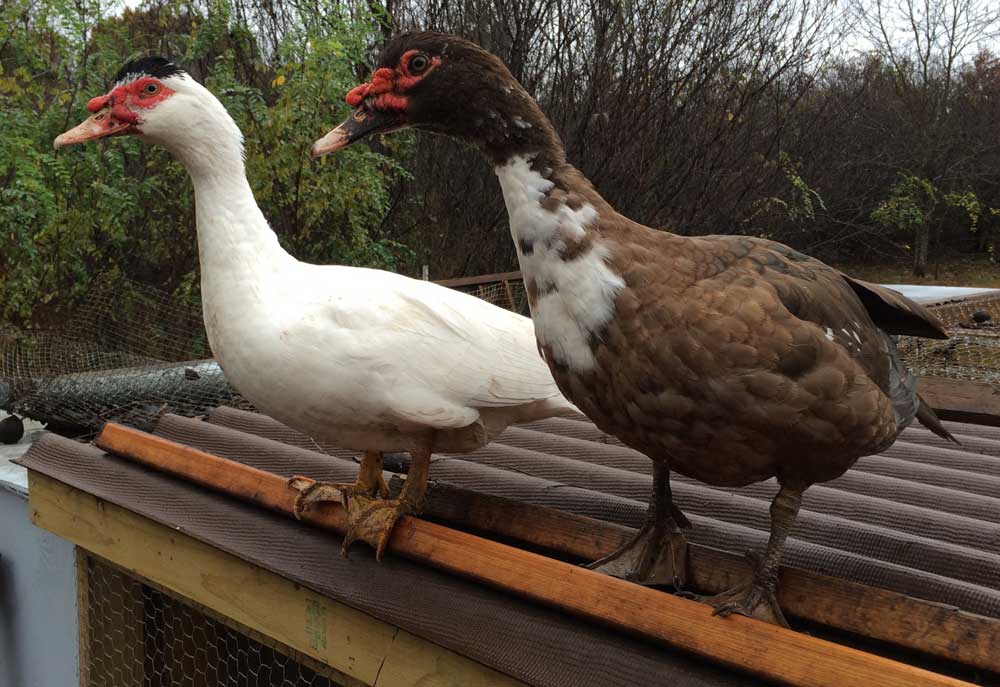