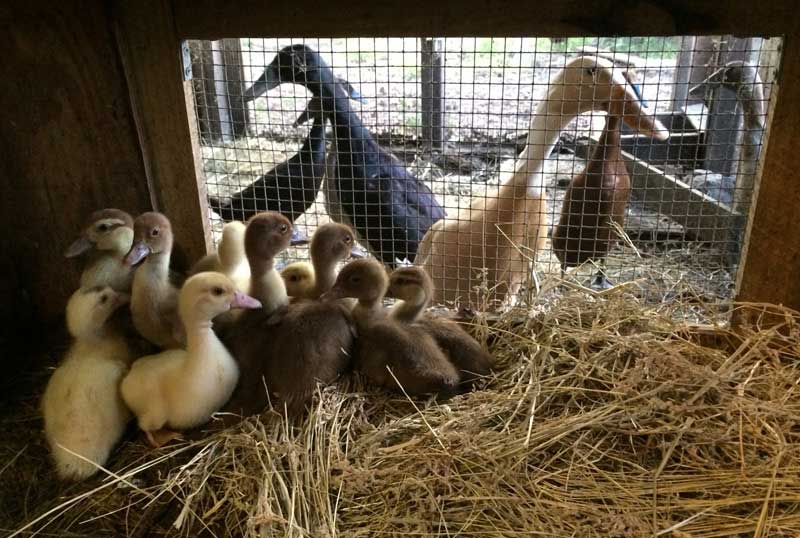 Muscovy ducklings are great fun to raise and invaluable around the barnyard. They eat a massive number of mosquitoes and flies and are one of the most beneficial breeds of ducks you can own. Make sure your baby Muscovies grow up right by following a few simple tips.

Fortunately, Muscovy ducklings are easy to raise, as long as you know what you’re doing! They are generally hardy and lively right from the start, but raising them can present a few specific challenges to watch out for.

Muscovies are a perching duck

This means even newborn babies come equipped with tiny, needle-sharp claws. You should be aware of these when handling the babies for safety’s sake, but also be aware they can climb shockingly well if highly motivated! For this reason it’s best not to keep them in a brooder that is too shallow.

If you brood them outdoors, this is great since they will start eating flies and mosquitoes and supplement their feed naturally. If they’re indoors, you don’t need to worry about them losing their interest in hunting. It is innate and they’ll start chasing bugs as soon as they’re outdoors.

However, it is fun to roll tiny treats such as peas or even bits of chick starter across the ground and watch them give chase! 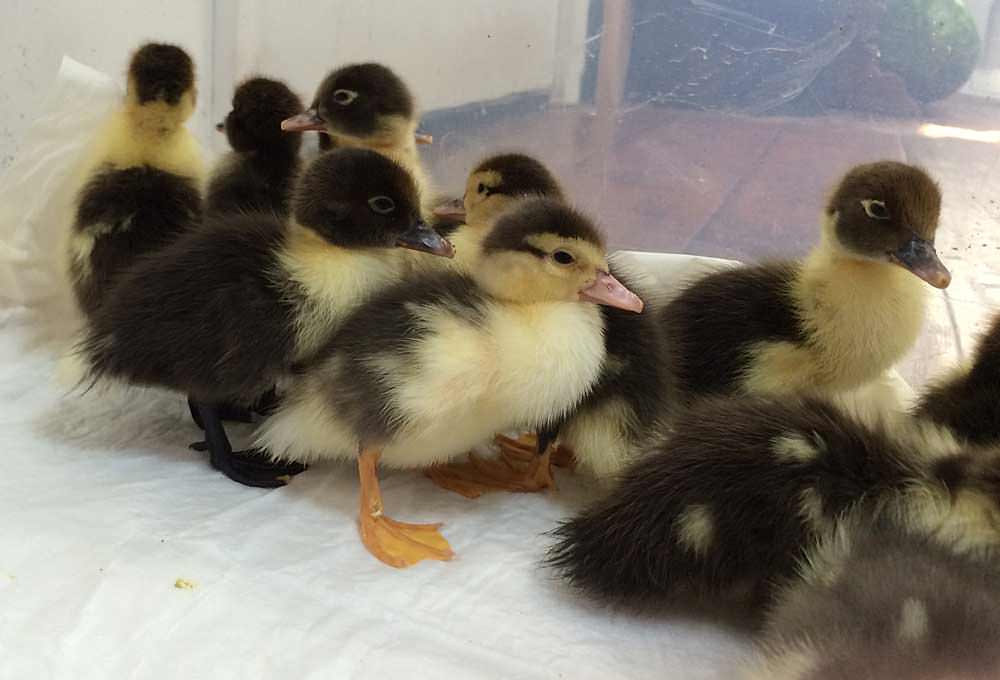 All baby ducklings are vulnerable without the oils a mother duck secretes from her feathers, but since Muscovies are not very water repellent even as adults, their babies are exceptionally vulnerable. I nearly lost a Muscovy duckling because it got in a shallow water tub for a while and couldn’t get out. It was soaked to the bone and in a state of shock, but fortunately recovered. Make sure any water pans are extremely shallow until your ducks start feathering out.

As a general rule, once your ducklings have feathers on their bellies, they are ready to start swimming–just make sure they can easily get out of the tub.

While chick starter should be available at all times, I also offer them peas, finely chopped greens such as lettuce or spinach, and grass clumps to climb on. It’s easy to use a garden tool to hack out a small section of sod with the grass still attached–the baby Muscovies go wild for it, nibbling on the grass and eating tiny bugs in the soil. And, peas are important for ducklings to eat since they are a natural source of niacin, which all ducks need to grow strong legs. 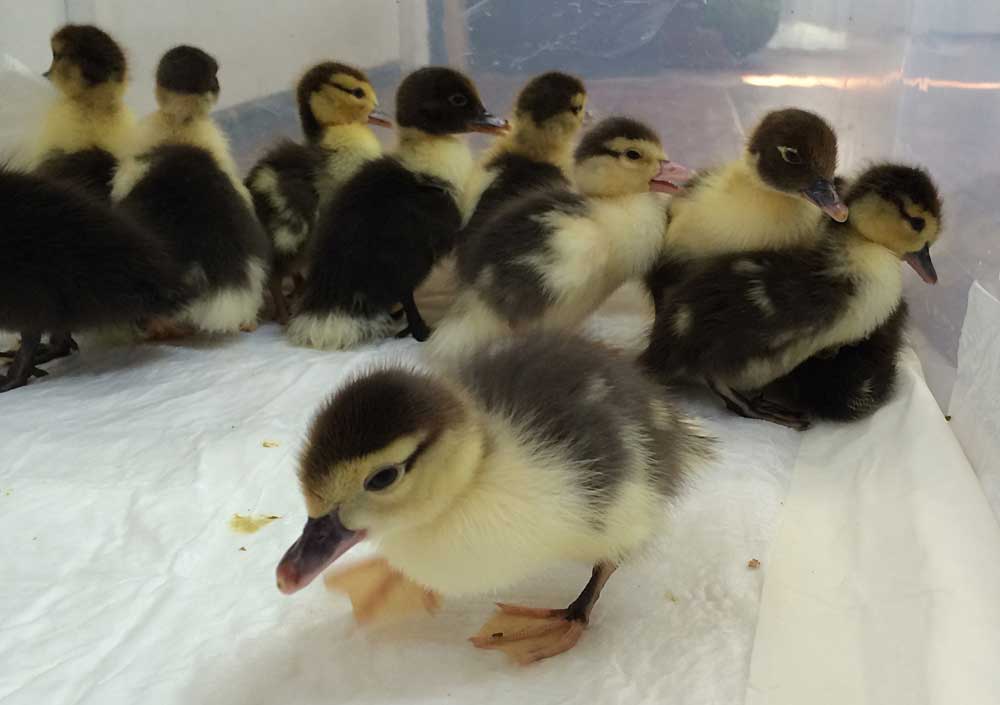 Muscovies need to be raised with their own kind

While it’s possible to raise Muscovy ducklings with Mallard-derived ducklings, there’s no question that they prefer to be with their own breed. The reason for this is their behavior and vocalizations are incredibly different from “normal” ducks. My adult Muscovies live with and tolerate the other breeds of ducks, but they would rather roost together and chatter to each other than socialize with the other breeds.

For your baby Muscovies’ own healthy development, it is strongly recommended to never raise a lone Muscovy. Having at least two is important, but a group is even better! (Ducks feel more secure in greater numbers.)

As cute as they are, it’s best to avoid over-handling

Muscovies are a very calm breed and often wind up quite literally underfoot, staring up at you in the hopes of getting a treat. This is a very cute and endearing quality, but there needs to be a clear line between humans and ducks. If the ducklings bond too closely to you, or imprint on you, they will think you’re a duck–which means they may become very aggressive as adults. This is especially true for males, and you definitely don’t want a huge male Muscovy with his powerful wings and hooked claws thinking he can attack you!

I talk to my Muscovy ducklings and give them treats to teach them my presence is a good thing, but I make it a point to mostly leave them alone. They will be friendly enough when grown without risking making them aggressive towards humans. 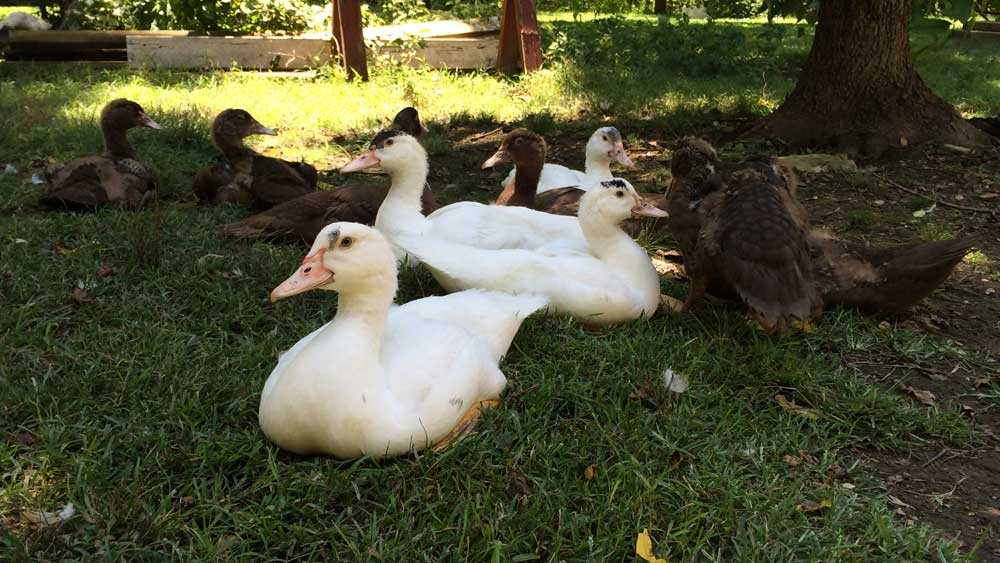 31 thoughts on “How to properly care for baby Muscovy ducklings”